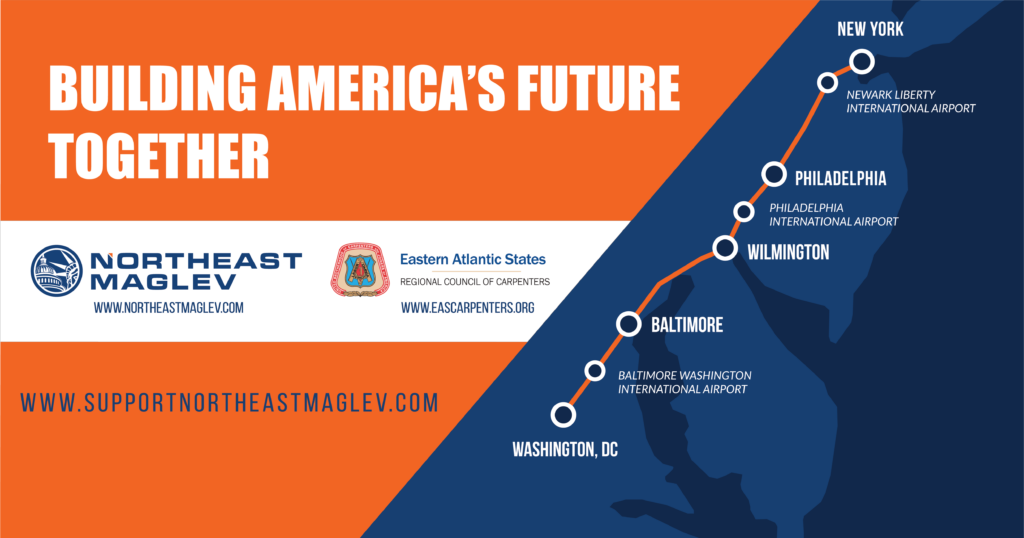 The Baltimore Washington Rapid Rail (BWRR) will develop Phase One of the Superconducting Maglev (SCMAGLEV) high-speed train project. Its route will include stops at Washington, D.C., BWI-Thurgood Marshall Airport and Baltimore, connecting the two major cities in 15 minutes.

“Our region is fortunate that Northeast Maglev is investing locally and bringing the SCMAGLEV train project, the world’s fastest and most advanced passenger train, to the U.S. Northeast Corridor,” said William Sproule, Executive Secretary-Treasurer of the Eastern Atlantic States Regional Council of Carpenters. This transformational project will connect Washington, D.C., to New York City with stops between in only one hour.

This project will generate tremendous economic and workforce development opportunities. Construction, which could begin as early as 2022, will include a deep tunnel for 70% to 75% of the route to avoid displacing homeowners.

This $13 billion project will provide construction contract opportunities during Phase One, resulting in the creation of an estimated 74,000 construction-related jobs and 1,500 permanent jobs. The project’s economic impact in the state of Maryland will have an unprecedented economic impact.

“We are committed to training workers for a long and family-sustaining career,” said EST William Sproule. “It will be our honor to provide our training to this $10 billion project that will employ 74,000 people in the construction industry.”

BWRR has developed its Diversity, Equity & Inclusion Plan for Economic Opportunity in response to some of the systemic barriers preventing communities of color and women from finding opportunities in the workplace and success in the business community. BWRR will work with community, corporate and government stakeholders to develop, construct and operate Phase One of the SCMAGLEV train service.

Residents and businesses in Anne Arundel, Baltimore and Prince George’s counties and Baltimore City will benefit from the unprecedented levels of economic opportunity the project will generate for diverse populations.

“At this moment in our nation’s consciousness, we must create and sustain an exemplary model for diversity and inclusion in national infrastructure projects … We are proud to announce the plan and work with equally committed partners,” stated Wayne Rogers, Chairman and CEO of BWRR and Northeast Maglev.

The Diversity, Equity & Inclusion Plan for Economic Opportunity include the following goals:

■ 40% of the 74,000 construction-related positions over 7 year in Maryland recruited from communities of color and women, many of whom will be recruited from local jurisdictions along the project route.

■ 25% of an estimated 1,500 permanent jobs in Maryland, including positions in business, cyber security, engineering, logistics, maintenance, repair, operations and other fields.

■ 25% of project spend on long-term operations to MBE and WBE businesses.

“The current pandemic shows that communities of color are particularly vulnerable during hard times, which is why a project like the SCMaglev train offering tens of thousands of jobs and billions of dollars of investment must be taken seriously,” said Maryland State Delegate Darryl Barnes, chair of the Legislative Black Caucus of Maryland. Barnes continued, “for instance, Prince George’s will benefit from approximately 500 proposed permanent jobs making it the largest concentration of jobs along the route. Residents will have access to thousands of union construction careers to help them enter the middle class, and with some of our communities boasting Maryland’s highest number of minority businesses, we expect many local firms will find contracts,” Barnes added. “Jobseekers, contract seekers, and others will be better off thanks to these pathways for county residents to grow and sustain wealth.”