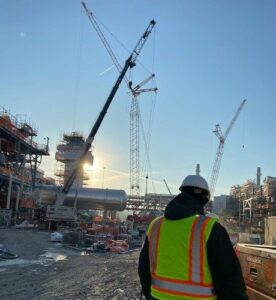 In the 21st Century, members of the Union Brotherhood of Carpenters and Joiners of America (UBCJA) span a variety of crafts such as general carpentry, pile driving, trade show, interior design, mill cabinet and millwrights. The UBCJA is a diverse Union with nearly half a million members in the U.S. and Canada. Our members are your neighbors, they are your little league coaches and they are your elected and appointed officials. Today, our state-of-the-art, no debt apprentice training sets the standard in our industry and ensures that workers have the training to operate efficiently and safely on the job site.Read More

Politicians from West Virginia passed a “Right to Work” Law in 2016 that was later overturned by the courts in 2019. The Eastern Atlantic States Regional Council of Carpenters continues to join other unions in fighting against this attack on workers rights as it moves through the court system.Read More

Sisters In the Brotherhood Committee is Formed: 1998

By 1957, there were almost 9,000 female members of the Carpenters union. In 1998, the first local Sisters in the Brotherhood committee formed, and in 2002 the union held its first Women’s Conference. Sisters in the Brotherhood was founded in 1998 to recruit women into the Carpenters Union. The Northeast Regional Council of Carpenters (NRCC) was tasked by the UBCJA to pilot a SIB pre-apprenticeship program. The NRCC’s SIB program celebrated the five-year anniversary of this pilot program with the inaugural SIB Leading the Way Conference on April 13-15, 2018.Read More

Douglas McCarron is elected as the general president of the United Brotherhood of Carpenters and Joiners of America. Since being elected General President in 1995, McCarron has undertaken the most extensive restructuring in the Union’s more than 135-year history, moving the organization to a regional structure that matches modern construction markets. McCarron and his leadership team were re-elected to five-year terms in 2000, 2005, 2010 and most recently in 2015.Read More

With the failing economy and union struggles of the 1970s and 1980s. The UBC had to adapt to a changing construction climate. Many small towns had individual locals and with changing technology and the shrinking of the UBC membership these smaller locals were merged into larger area locals. This strategy helped to fight back against union busting organizations and regain lost markets.Read More

Major industrial construction organizations banded together to create the “Business Round Table”. The group was composed of March Group, General Electric and the Construction Users Anti-Inflation Roundtable and lead by Roger M. Blough, then Chief Executive of U.S. Steel. It championed the anti-union Open Shop and the Merit Shop. Its effects were devastating to Unions and by the early 1990’s, Union membership had decreased by nearly half from 1970s levels. Union membership fell by five million between 1975 and 1985. In manufacturing, the union labor force dropped below 25 percent, while the mining and construction industries also dropped dramatically. Most notably, in August 1981, President Reagan ordered striking members of the Professional Air Traffic Controllers Organization to return to work. Two days later, he  fired 11,345 striking members who refused to return to work.Read More

On December 29, 1970, President Richard Nixon signed into law the Occupational Safety and Health Act to protect workers’ safety and health. The purpose of the legislation was to “assure so far as possible every working man and woman in the Nation safe and healthful working conditions.”Read More