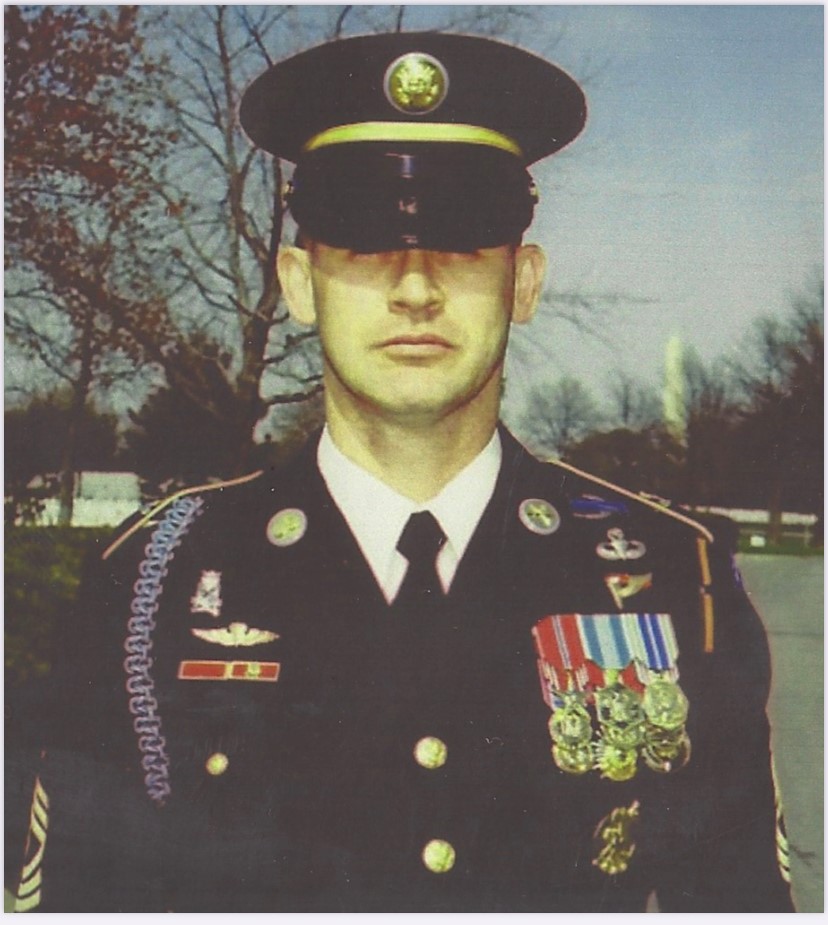 At the time of the attacks of Sept. 11, I was serving as the First Sergeant of Company C, 3rd Infantry Regiment, which is located on Ft. Myer in Arlington, Virginia. During the second week of September, my company was assigned as “support company” and was tasked to perform all details within the national capital region. The biggest task schedule for the week was to assist the Secret Service in security at the World Bank Conference scheduled for September 12 in Georgetown.   We were also scheduled to conduct a wreath-laying ceremony involving the President of Australia at the “Tomb of the Unknowns” on Sept. 11.  Our schedule for the day was to conduct a rehearsal at 06:00 hours at the tomb, conduct the ceremony at 11:00, and then immediately after lunch, we were going to conduct riot-control training for the events on the following day.

The rehearsals at “The Tomb Plaza” went as planned, and we were back prepping by 08:00.   At 08:45, the first plane struck the WTC, and we were glued to the news.  At 09:03, the second plane hit, and we knew our plans would change.  Shortly after that, I received a call from one of my platoon sergeants (SFC Dennis Gunn), who was at the Pentagon, informing me that a plane had crashed into the building. Before I could digest that, I got a call from Regimental headquarters informing me the wreath ceremony was cancelled and that we were to immediately deploy to the Pentagon to assist in security and rescue operations.   Within 15 minutes, we had the 130 soldiers of Charlie Company in trucks and en route to the Pentagon, which was only two miles away.

When we arrived, there were few agencies present except for first responders.  We decided that the best move was to grab some real estate and set up two tents to use as an operations center.  We were soon tasked to start collecting pieces of the plane that were scattered over the area.  My executive officer (1LT Brian Farrell), along with a HMMW-V (Hum-V), was grabbed by the FBI and taken to the Ring-C to secure the front landing gear.  As much as we wanted to help, that first night we never entered the building. We were used as labor for government agencies setting up command sites.   We left the Pentagon and returned to the company area around 01:00 hours.

We returned to the Pentagon on Sept. 12 at 07:00.  That morning, we were informed that we would be entering the building to remove the remains.  Starting late morning, we were broken down into teams of seven; four soldiers on a litter, and an NCO with a flashlight, an FBI agent, and a photographer.  I was the NCO for the second team in.  As we entered the building, wearing masks, Tyvek suits, and rubber boots, we walked down the dark hallways that had two to three inches of standing water.  Smoke still bellowed from small fires as we got closer to the crash site.  Once there, we saw orange “X’s” spray painted next to doorways.  I believe the area had been marked by a K-9 unit from Tennessee.  Dots were painted into the quadrants of the X’s to indicate the location and number of bodies.

The first door we passed through led to what had been a common office shared by several workers. It was very difficult to negotiate the room as the drop ceilings, duct work and lighting systems from years of renovations were all on the floor.  It was very hot, dark, and we were climbing piles of debris.  We immediately came across a body that was partially covered by a desk.  We stepped back and let the agent make notes, and the photographer took pictures.  The agent then searched the body for identification.  A wallet was found, and the ID was extracted and placed on the body.  The photographer then took additional pictures.   The man’s name was Donald Simmons.  We were then instructed to place the body in a body bag and place it on the litter.  We did as we were instructed and then began the very difficult task of carrying the litter out of the building and back to our point of entry.

As we exited the building, we carried the litter to a refrigerated container where the remains were cataloged and stored.    We then gave our masks to the next team and took a break.  We reentered the building several times that day, completing our task in the same manner.  It was very strenuous, both mentally and physically. We stayed on-site until we were relieved by Alpha Company at 19:00.  They worked through the night, and we relieved them, joined by Echo Company, at 0700.  This rotation continued for four days.

By Day Three we had firefighters using “Bob Cat” bucket loaders removing debris.  As they removed debris, we would sift through the rubble looking for remains.  I believe it was on Day Three (Sept.14) that President Bush arrived on-site and shook hands with most of the troops.  As we got closer to the point of impact, the remains became smaller and more difficult to discover.  For me this was the most challenging time psychologically because there were quite a few children on the plane.  At this point, we had an additional task of bringing in cribbing, what appeared to be 8”x8”x 6’ sections of lumber to shore up the damaged columns.  I think we got to the fuselage on Day Four.

By Day Five, we were finishing up remains recovery and were preparing the crash site to be turned over.  Throughout this time, I also had soldiers (I believe a squad from the 3rd Platoon) attached to the NTSB and FBI who were laying out the plane pieces in the North Parking Lot.   I forget exactly when we finished our mission, but most likely it was Day Six or Day Seven.

I was interviewed immediately following the attacks by the Center of Military History, and my accounts are published in Then Came the Fire, ISBN 9780160915505, pages 270 to 275.