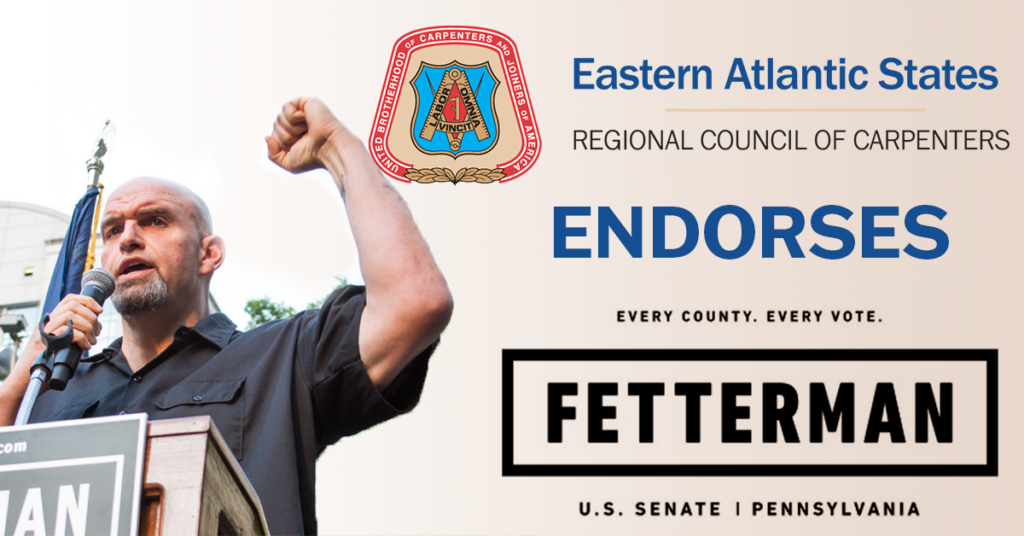 Philadelphia, PA — Pennsylvania Lt. Governor John Fetterman on Wednesday received the endorsement of the Eastern Atlantic States Regional Council of Carpenters in the U.S. Senate Race. The EAS Carpenters represent close to 19,000 carpenters who live and work in the Commonwealth of Pennsylvania.

“John Fetterman has been a devoted, unapologetic, and fierce supporter of union labor in the Commonwealth of Pennsylvania,” said EAS Carpenters Executive Secretary-Treasurer William C. Sproule. “That is the type of leader union workers need in the US Senate. John will not shy away from protecting the union way of life from those who look to undermine it, and will fight for every working families’ ability to earn the fair wages and benefits they deserve.”

“Receiving the endorsement of the Eastern Atlantic States Regional Council of Carpenters is an absolute honor,” said Lt. Gov. John Fetterman. “The union way of life is sacred, it’s what built this country, and it must not only be protected but expanded. I will always fight for workers and get them cut in on the deal. It is truly an honor to stand with the EAS Carpenters and workers across Pennsylvania in the fight for the PRO Act, trade deals that benefit American workers, expanding American manufacturing, and other actions that put more power directly into the hands of workers. Thank you, from the bottom of my heart, for your support in this campaign.”

Fetterman is a fierce supporter of unions and organized labor. In the past year, Fetterman visited the striking BCTGM Local 374G workers in Lancaster twice; walked the picket line with the Ironworkers Regional Shop 851 workers in Erie; rallied with striking Scranton teachers twice; stood in solidarity with Kutztown University dining workers trying to unionize; walked the picket line with UPMC workers on a one-day strike in Pittsburgh; rallied with Coffee Tree Roasters workers in Pittsburgh who announced their intention to unionize; supported Harrisburg Area Community College faculty at a rally prior to their unionization vote; and rallied with striking Armstrong County Memorial Hospital workers.

He has also previously asked his email list to donate directly to unions’ strike funds for the BCTGM workers in Lancaster County, the United Auto Workers who were on strike against John Deere across the midwest, the teachers previously on strike in Scranton, and the UPMC workers in Pittsburgh.