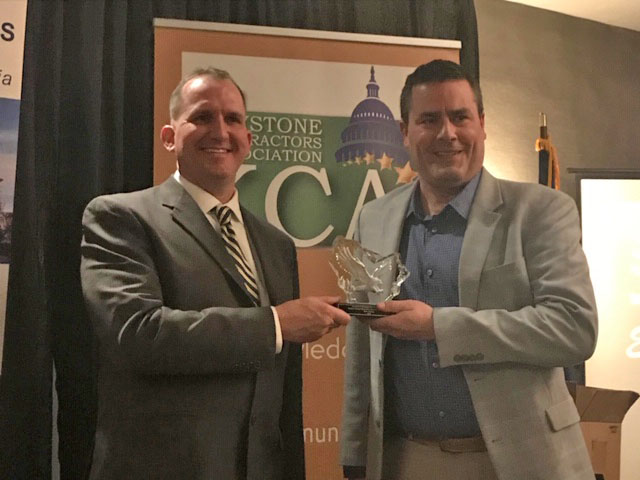 The Keystone Contractors Association and its Board members recently launched the “Thomas George Memorial Community Service Award” to recognize construction workers who display relentlessness within the community and excellence on the construction site. On February 20th, 2020, Eastern Atlantic States Regional Council of Carpenters member Steve Motyka of Local 445 was the first-ever recipient of the award.

“There were newspaper clippings I read that featured Steve discussing the great efforts of the team of volunteer carpenters,” Jon O’Brien, Executive Director of the Keystone Contractors Association “However, I discovered it was Steve as the driving force to see these community projects get completed,”

Brother Motyka exemplified the award with his community service and the respect he earned from his fellow Union carpenters. Steve is a great role model and motivates everyone to do their part to make their union and community better.

“I never volunteer in pursuit of personal accolades. My only hope would be for my actions to influence others to get involved,” said Brother Motyka.

“Steve had earned respect as a job site leader and he had the list of community activities to make him an excellent person to be considered,” said O’Brien

The award was named after former Keystone Contractor’s Association Executive Director Thomas George. George was a well-respected individual within the construction industry in Pennsylvania who actively gave back to the community and served on numerous labor, medical and pension fund boards, up until the age of 89.

“The construction industry can be extremely modest,” O’Brien explained. “They do not perform good deeds in the community to be recognized, so I created this idea,”

By launching this award, Jon’s hopes are that this will help shine a light on all the community service these carpenters fulfill. One of Jon’s favorite quotes is by John F. Kennedy,

“One person can make a difference and everyone should try.” Jon added, “To me, Steve epitomizes this quote, and personally, after learning more about Steve, I know I can do more in the community.”