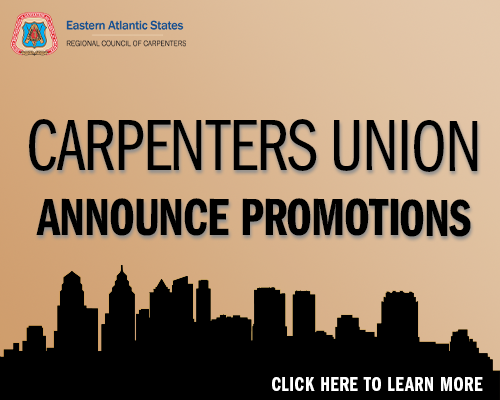 In promoting James Hocker to Philadelphia Regional Manager, EAS Executive Secretary-Treasurer Bill Sproule said, “since first joining our union as an apprentice twenty years ago, James has acquired a well-deserved reputation for hard work, quick strategic thinking and dedication to expanding workers’ rights and opportunities to increase our union’s market share of jobs. Having James as our new Philadelphia Regional Manager will be a tremendous asset as we move forward to expand our overall market share and employ our highly skilled members on job projects throughout the region.”

Hocker’s new responsibilities will include overseeing activities in southeastern Pennsylvania and Maryland.  James is a second-generation union carpenter and 20-year member of the union.

“As a second-generation carpenter, I am honored by the trust and confidence Bill and all my fellow brothers and sisters have placed in me. I know the superior quality and craftsmanship of our highly skilled members, and I pledge to continue working as hard as I can to expand our market share in the Philadelphia region,” Hocker said.

The Carpenters also announced that Kevin Morrow has been appointed the new Organizing Director. A 25 year carpenter, Morrow was first hired on Council staff in 2011 as a Council Representative for the Bucks County and Philadelphia area. Later he served as Assistant Director of Organizing under the Metropolitan Regional Council of Carpenters. Most recently he has served as a Senior Council Representative for the Organizing Department who was additionally assigned to lead the Eastern Atlantic States Regional Council Organizing Task Force.

In addition to his roles on staff, Kevin has held leadership positions, including Delegate and Trustee for Local Union 167. In his community Kevin has in the past served on the Democratic Party Committee of Philadelphia, the Perkasie Planning Board, and the Bucks County Workforce Development Board.

The Eastern Atlantic States Regional Council of Carpenters represents over 41,000 of the most skilled carpenters who live and work in Delaware, The District of Columbia, Maryland, New Jersey, Pennsylvania, Puerto Rico, Virginia, and West Virginia. In Philadelphia and surrounding counties, the union represents 8,000 carpenters in Philadelphia and surrounding 7 counties alone. EAS Carpenters are trained in many different trades, including: commercial/residential carpentry; heavy highway; pile-driving; floor-layering; mill cabinet work; and trade show construction.